Social media posts claim an executive order from Joe Biden eliminates cash and enables the government to monitor transactions. This is misleading; while the US president did call for additional research on a central bank digital currency, the order does nothing to limit cash use — and experts say any such system would be legally required to include privacy protections and involve the independent Federal Reserve, banks and Congress .

“Biden cash-free central bank digital currency coming in December.. y’all just gonna wait till he shut everything down?” says the speaker in a TikTok video viewed more than 97,000 times.

A similar warning was tweeted September 18, 2022 by former congressman Justin Amash, while an Instagram post claimed a digital currency “gives the feds 100% access to everything you own.”

On Facebook, talk show host Clay Clark said in a September 18 video that a central bank digital currency “could be turned on and off the way that Twitter can turn on and or off your account.”

Pointing to Executive Order 14067, he says: “This is a significant executive order that every American should know about because it would make it where you cannot buy or sell if certain parties aren’t a fan of your actions if you voted for President Trump as an example that could turn off your ability to buy or sell.” 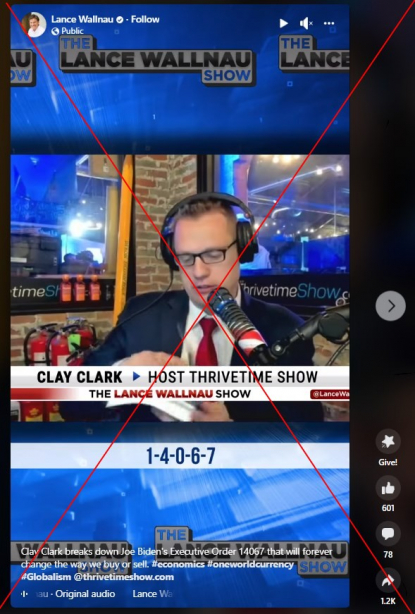 But the US is far from launching a “digital dollar,” which experts say would require participation from the independent central bank, the financial industry and Congress.

“Nothing has happened so far,” said Josh Lipsky, senior director of the Atlantic Council’s GeoEconomics Center, which studies the global development of digital currencies. “All that has happened is a study and an executive order that calls for more research and development.”

A US Treasury spokesperson confirmed to AFP that there are no plans to launch a digital currency in December 2022.

On March 9, 2022, Biden signed an executive order that called on federal agencies to conduct an “assessment” of a national digital currency. The order said any such effort would “promote democratic values; the rule of law; privacy; (and) the protection of consumers.”

Six months later, in September 2022, the White House issued a technical analysis outlining the benefits and risks of a central bank digital currency (CBDC), noting that “it is probably better for privacy and civil and human rights purposes for some pieces of information to be collected by intermediaries rather than the central bank.”

The move comes as China is in the process of launching its “digital yuan,” raising fears that authoritarian countries could use digital currency to increase surveillance and control.

A September report from the US Treasury Department recognized these risks, saying “a system with a publicly visible Ledger … may result in reduced user privacy,” thus highlighting the need for a US model where “payment services would be managed by intermediaries and other private sector participants.”

Lipsky said “China is the exception” in moving towards a centrally controlled digital currency, and that other countries are building their systems around existing private financial infrastructure. They said statements from the Federal Reserve, the Treasury Department and the White House indicate any US digital currencies would be decentralized and rely on private companies.

“The Fed couldn’t shut something off because … (a CBDC) would be intermediated through the financial system including the banks and possibly (financial technology) providers,” Lipsky said.

Darrell Duffie, a Stanford University finance professor who has researched and testified before Congress on the topic, agreed. They said that while digital currencies pose a theoretical risk to privacy, this would be mitigated by an independent central bank and US laws that protect financial privacy.

As many as 100 countries are considering or testing digital currencies, according to the International Monetary Fund (IMF). Such currencies could offer faster transactions and lower costs, notably for international transfers.

“In many countries, privacy concerns are a potential deal breaker when it comes to CBDC legislation and adoption,” she said. “So, it’s vital that policymakers get the mix right.”

A Federal Reserve report published in January 2022 said policymakers would examine digital currencies that could “complement, rather than replace, current forms of money,” “protect consumer privacy” and “have broad support from key stakeholders.”