Amkor Technology (NASDAQ: AMKR) continues to post good quarterly numbers and it still trades at some of the lowest multiples for a tech stock, but June has been a month to forget. AMKR was already in a hole, yet YTD losses increased by a lot in the month of June. In addition, the charts suggest the door has been opened for what is likely to be more downside. Why will be covered next.

The immediate outlook has gotten worse for AMKR

The stock has lost 31% of its value YTD. This may seem horrible, but it’s worth mentioning that AMKR has nonetheless done better than many other semiconductor stocks, even after taking as big a hit as it did. For instance, the iShares Semiconductor ETF (SOXX) is down 34% YTD. The outperformance may not be large, but it’s there regardless. Still, June has been a particularly bad month with the stock falling to new lows as shown in the chart below.

More importantly, the stock appears to have lost support that had managed to stand its ground for many months. Notes how the lows going all the way back to last year can be connected to form a descending trend line. While support did not prevent the stock from declining, it did slow down the pace of descent. Those brakes are now gone.

The stock was consistent in bouncing whenever it came into contact with the aforementioned trend line. That is until a few days ago when the stock broke through the support provided by this trend line after previous attempts had failed to do so. Moreover, an attempt to recover did not succeed. The stock tried to move back above the trendline, but it was unable to get past the trend line.

Keep in mind that the QoQ decline in the quarterly numbers is in line with seasonal trends where Q4 tends to be stronger than Q1. In all, revenue, gross profit, operating income, EBITDA and EPS all set new record highs for the first quarter of the year. Q1 was without a doubt a very productive quarter. The table below shows the numbers for Q1 FY2022.

Why there is reason to remain optimistic

Q2 guidance is a disappointment, but there is reason to be optimistic. The Q1 earnings report included the following statement, which explained the reason behind the downbeat guidance.

Our second quarter guidance reflects the estimated impact from a temporary, government mandated COVID-19 lockdown of our Shanghai operations. We anticipate that our Shanghai factory will return to normal production during the second half of the quarter

A COVID-19 outbreak led to lockdowns in China, which are expected to negatively impact quarterly results at AMKR. Still, the dip is expected to be temporary. It’s worth mentioning that if it wasn’t for the COVID-19 lockdowns in China, Q2 revenue could have been more like $ 1,590-1,690M, which represents a YoY increase of 13-20%. Similarly, Q2 gross margin could have been 300 basis points higher if not for the COVID-19 lockdowns and resulting underutilization.

More importantly, AMKR is confident it can make up for most of the lost business in the following quarters. Market demand remains strong.

From the revenue perspective, and also from the margin perspective, it should be very positive that we hear we can make up the loss in the second quarter in the remaining part of the year, maybe not in the exact portfolio elements. But we believe that the market is strong. We see upside for the details in the fourth quarter. So we have definitely confident that that we can make up for the Q2 correction due to the lockdown.

A transcript of the Q1 FY2022 earnings call can be found here.

There is reason to believe the quarterly numbers will rebound in the second half of the year. In addition, AMKR comes with a number of positive attributes potential buyers may want to pay attention to. For instance, the asking price for AMKR is on the low side. The table below shows the multiples AMKR currently trades at.

AMKR has an enterprise value of $ 4.4B, which is equal to 3 times EBITDA on a forward and a trailing basis. Price-to-earnings ratios are also in the mid-single-digits. AMKR trades at 6 times forward earnings with a trailing P / E of 6. The stock is valued at just 1.35 times book value. The balance sheet is also in good shape with $ 1.2B in cash and short-term investments canceling out $ 1.2B in total debt. Debt-to-EBITDA ratio is a healthy 0.9x.

AMKR is currently in a tough spot. The stock has trended lower for months, going all the way back to last year. The trend looks bearish for the stock. Furthermore, support had restrained the pace of the decline, but the stock has now fallen below it in the last few days. It is said that what used to be support becomes resistance if the former fails and that seems to be what has happened based on recent price action. Support is gone and resistance has taken its place.

The stock is up against resistance, which has already managed to reject it once. While it is possible for the stock to overcome resistance on a subsequent attempt, the more likely path is for the stock to move lower, possibly until it encounters support. A continued decline would not be unusual with guidance calling for earnings to take a hit with lockdowns in China due to COVID-19. The short-term outlook looks bearish for AMKR. If someone wants to throw in the towel on AMKR, then it is hard to fault someone for doing so with everything going on at the moment.

There are also potential headwinds out there that could cause additional problems. For instance, there are signs of weakening demand for certain types of consumer goods. For instance, shipments of smartphones and those of PCs are both expected to decline in 2022. AMKR is still seeing strong market demand according to the most recent earnings call, but that could change as the year goes by.

It’s not easy sticking with AMKR since the stock is likely heading lower in the near term, but I am bullish on AMKR nonetheless as mentioned before in a previous article. AMKR is admittedly down right now, but it is likely to get out of it without too many problems. The COVID-19 situation in Shanghai has reportedly come under control.

While further flareups are a possibility, a normalization bodes well for the second half of the year. AMKR should be able to make up for the Q2 losses in the second half, especially with seasonality turning in AMKR’s favor with the upcoming holidays at the end of the year. The fundamentals have not changed.

The stock is in a hole at the moment, but the next quarterly guidance could be much better than the one that preceded it. With the help of seasonality and an easing up in China, a strong rebound in quarterly guidance is very possible. This may be enough to trigger a rally in the stock, especially with multiples where they are.

Valuations for AMKR are very attractive at the moment with AMKR trading at just 3 times EBITDA. Multiples are arguably too low for a company that is still growing by double digits once adjusted for the temporary effect caused by lockdowns. The stock going lower will only make those multiples even more attractive than they already are. The balance sheet is in good shape.

Bottom line, the pros outweigh the cons. Further stock declines are to be expected, but that could be an opportunity with an expected rebound later in the year. While longs will need to be patient as further downside is likely in the near term, the combination of current valuations and a likely rebound in the second half makes long AMKR worth betting on.

UEFA to Launch Metaverse Gaming League Ahead of Women's Euro 2022 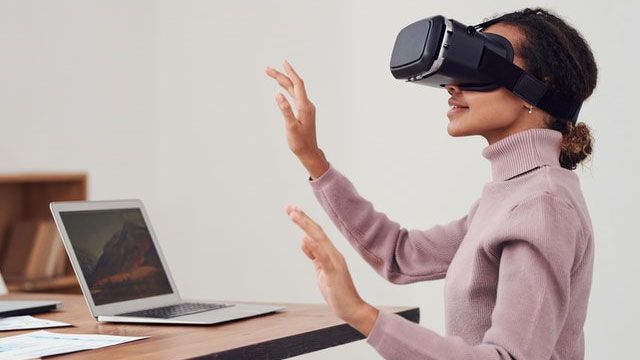 Extra Limbs in Virtual Reality Feel Like the Real Thing